Time for a better future

ASB has been involved in Niger since 2005. It helps people use the available resources to make a better living. 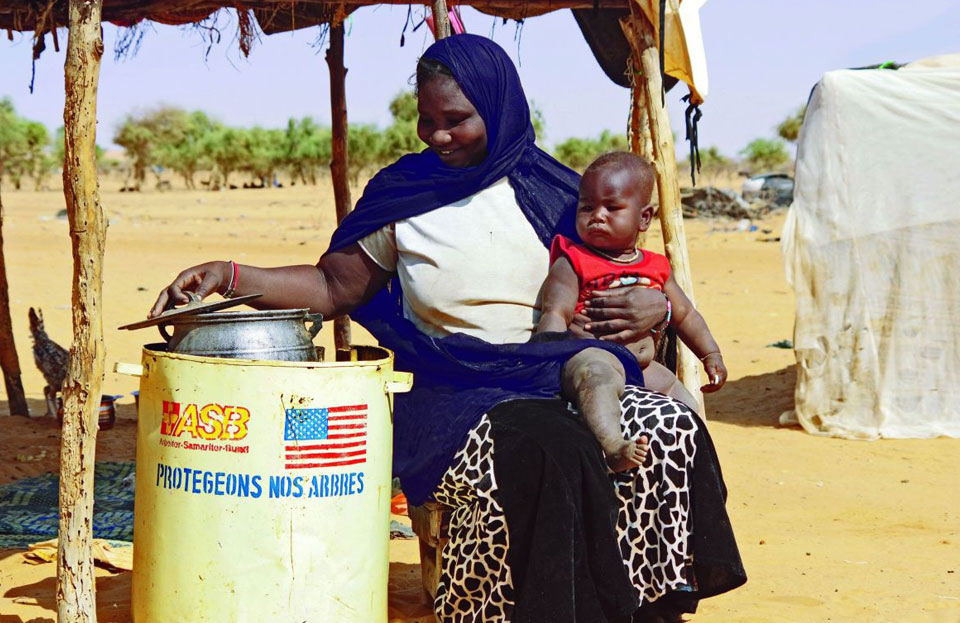 ASB gave Fadima Alhassane a simple gas stove that she can use to prepare meals for the whole family.
This small piece of equipment has a great impact and has completely transformed the life of the Malian refugee.

In the past, every day of the life of Fadima Alhassane was divided into two halves: Before the young mother cooked food in the afternoon, did the laundry or took care of her four children, she spent all morning searching for firewood – far away from Intikane where she lives.

Intikane is an area for refugees in the Tahoua region in western Niger that has a lot of desert. Four years ago, the 30-year-old woman escaped from the unrest in Mali and came here. Although she was now safe, carving out a living for the family was very difficult.

"We had to leave our huts early in the morning and walk and walk to gather dry wood for cooking", Fadima Alhassane tells us. Two of her children are not yet old enough to go to school, and so they had to accompany her on this arduous journey in up to 45-degree heat. "I was never able to start cooking meals before 2 in the afternoon", Fadima remembers.

This is a dangerous path, especially for women and girls who are often attacked in these remote areas. What's more, the time-consuming search for firewood is a significant constraint to development: many young girls don't have time to attend school. And they will not be able to stand on their own two feet when they are older.

In 2015, the UN Refugee Agency (UNHCR) prepared a study on wood consumption in Niger. According to the study, every household in Intikane needs about two wheelbarrows of wood a day. This has disastrous consequences: deforestation causes ever greater parts of the region to turn into desert. This inhibits the country's development in two ways: the time-consuming search for firewood leaves little time for other, more productive activities. What's more, the desertification of the land means that there are not enough important raw materials such as water, soil, wood and plants that are needed for many production processes.

Gas instead of firewood

ASB has found a simple solution for the firewood problem in Intikane: It has distributed 3,550 gas stoves in the region, which the people use to cook food. Each family can refill the gas bottles for free up to six times a year at a nearby petrol station. ASB thus makes sure that the gas stoves are used in the long term.

Thanks to the help from ASB, Fadima Alhassane can use the time she saves: by selling pancakes, the 30-year-old woman can now earn a small income. And many younger girls of the region can now finally go to school.

Intikane is an experiment: it is not an ordinary refugee camp, but rather a kind of assembly point for refugees from Mali. The huts are widely scattered, and there is lots of room to keep animals. The centre is adapted to the nomadic lifestyle of its inhabitants. Nevertheless, there is a lot of economic pressure. With the arrival of the Malian refugees, the natural resources in the region have become scarcer in recent years and there is more ecological damage. There is therefore a lot of competition between the refugees and the Nigerien communities.

ASB has been involved in Niger since 2005. The organization helps people use the available resources to make a better living – for example by building grain banks where food can be stored over a longer period of time. Above all, ASB is committed to helping stabilise the situation and make peace between the Malian and Nigerien communities. The organization supports initiatives that strengthen both communities. The gas stoves, for example, benefit around 22,000 Malian refugees and 40,000 Nigeriens.

The primary school in Intikane also benefits from ASB’s dedicated work: ASB country office in Niger fitted the school canteen with safe fireplaces and gas stoves. ASB also gives all 1,440 pupils two hot meals a day. Thanks to this initiative the school, the largest in the Tahoua region, now employs Malian refugees as cooks, construction workers and guards. For the displaced people, this is a great opportunity to stand on their own two feet again.

"For me, the school kitchen is a big relief", says a delighted Fadima Alhassane. "I don't have to worry about cooking meals for my two older children when they come home from school. They have already been well fed. And they love the school meals, because they change every day. We wouldn't be able to afford different meals", she adds.

The food helps the children cope with everyday life at school. Well-fed and strengthened, the pupils can concentrate on their lessons. This opportunity must not be wasted, because education will help Niger to develop.